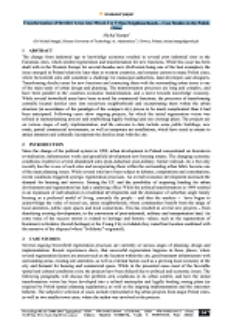 The change from industrial age to knowledge economy resulted in several post industrial sites in the European cities, which needed regeneration and transformation for new functions. While this issue has been dealt with in the Western Europe for several decades now (Zollverein being one of the best examples), the issue emerged in Poland relatively later than in western countries, and remains current in many Polish cities, where brownfield sites still constitute a challenge for municipal authorities, land developers and designers. Transforming derelict areas for new functions and connecting them with the surrounding urban tissue is one of the main tasks of urban design and planning. The transformation processes are long and complex, and have been parallel to the countries economic transformation, and a move towards knowledge economy. While several brownfield areas have been re-used for commercial functions, the processes of transforming centrally located derelict sites into mixed-use neighborhoods and incorporating them within the urban structure (in accordance of the paradigm of the compact city) proves to be much complicated, than it had been anticipated. Following cases show ongoing projects, for which the initial regeneration vision was refined in masterplanning process and establishing legally binding land use (zoning) plans. The projects are on various stages of early implementation, and the outcome to date include some public buildings, new roads, partial commercial investments, as well as temporary art installations, which have acted as means to attract attention and culturally incorporate the derelict areas with the city.

In our library since: